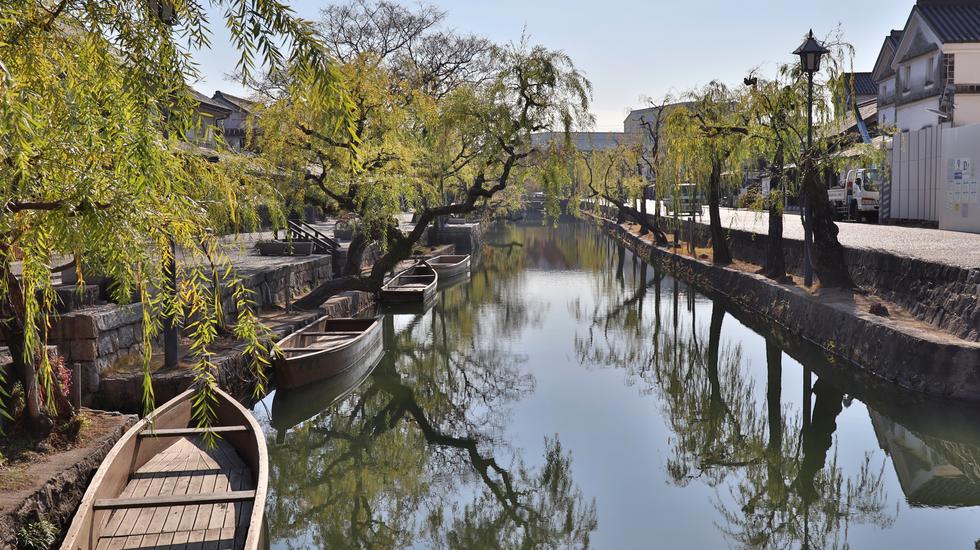 You You might have ticked off the big dogs on your last trip to Japan, but what of Japan's less-visited towns and villages - the places thick with culture and thin on tourists? We've pulled together five of our favourite less-visited destinations, including nature-rich national parks and the Instagram-perfect Venice of Japan.

All culture, few tourists: visit one of these five under-the-radar Japanese destinations

Why we can't wait to go back again: It's the perfect detox destination. Just under two hours's drive from Kyoto by car, this luscious landscape pours into the Pacific like a chartreuse-coloured oil spill. While this wild environment might look like God's own work, it's actually bound by a web of tight rules designed to protect it from exploitation. Sustainability is the keyword here. Check out the ama divers, a contingent of women who spend their days free-diving down to the seabed where they help to preserve the aquatic ecosystem by hand. We'll leave that to the experts and grab a sea kayak instead. You'll find us wiggling around the Ago Bay Islands before slurping a well-earned pint of local ale.

Before you go: Read this feature on Ise-Shima's unique cuisine, and for a little insight into the history of the ama divers or "sea mermaids".

Why we can't wait to go back again: Who doesn't love a beach holiday? Okay, this might not be a seaside getaway as you know it, but this lesser-visited city on Japan's Izu Peninsula has coastal views made for sunset strolls and a theatrical plot of cliff-edges which more than make up for its lack of stylish beach bars. Before sundowners at KAI Anjin ryokan, however, we'll make ourselves scarce. There are the barbie doll-pink gardens of Komuroyama Park to ogle, eight onsens in which to bathe and Mount Omuro or the Jogosaki Coast to hike. The brave can geotag themselves on Jogasaki Suspension Bridge which floats above an 18m drop.

Before you go: Check out the photographer Mark Edward Harris, specifically his The Way of The Japanese Bath series, to get a flavour of what to expect when visiting one of Ito's traditional onsen.

Why we can't wait to go back again: There's an old Japanese saying which goes something like: "Never say kekko (roughly meaning beautiful or splendid) until you've seen Nikko". Safe to say, this spiritual town, which was once the centre of Shinto and Buddhist worship, is objectively quite pretty. It's most famous for Toshogu, Japan's most lavishly decorated shrine, though there are countless others to visit as well as Nikko National Park, home to wild monkeys, roaring waterfalls and a few steaming hot springs. The cherry on the cake? It's easily reached from Tokyo by train.

Before you go: Watch Seven Samurai, a classic film set in 16th-century Japan, for an introduction to Japanese cinema.

Why we can't wait to go back again: It's that place you might have seen fleetingly on Instagram. The huge Yayoi Kusama pumpkin sculpture, set against a horizonless expanse of opalescent, still waters? Yep, that's Naoshima. It's often referred to as Japan's "art island", but we use it as a base for paddling to neighbouring outcrops. Hop over to nearby Takamatsu for a portion of Sanuki udon noodles - a local speciality; worth the journey - then on to Megijima Island, a sleepy mound which peeps out of the Seto Inland Sea. It's referred to as "Ogre Island" in the old Japanese folk tale of Momotarō (or "Peach Boy" in English), but it's lovelier than it sounds.

Before you go: Take a peek at the work of photographer Charles Fréger. In his Yokainoshima series, he documents the outlandish costumes worn during ancient Japanese rituals at festivals and ceremonies. Keep your eyes peeled for that ogre.

Why we can't wait to go back again: When we describe Kurashiki as the Venice of Japan, we mean it in the best possible way. It's scored by canals gently caressed by bowing willows, it's home to Ohara Museum of Art (which holds the oldest collection of Western art in Japan) and the vestiges of its past life as a wealthy trading hub remain in its traditional architecture, embroidered with trailing greenery. Fashion buyers with an eye on high-quality denim are known for hopping it to Kurashiki; the Kojima District is known as the birthplace of Japanese-made jeans. Don't leave without a pair of selvedge jeans in your suitcase. Too pricey? Grab a scoop of Kurashiki's famous denim-blue ice cream, instead.

Where we're staying: This tiny house

Before you go: Pay an e-visit to Jeans Street (yes, this famous thoroughfare in Kojima has its own website) to see exactly why it's so popular among the world's most discerning denim-lovers.