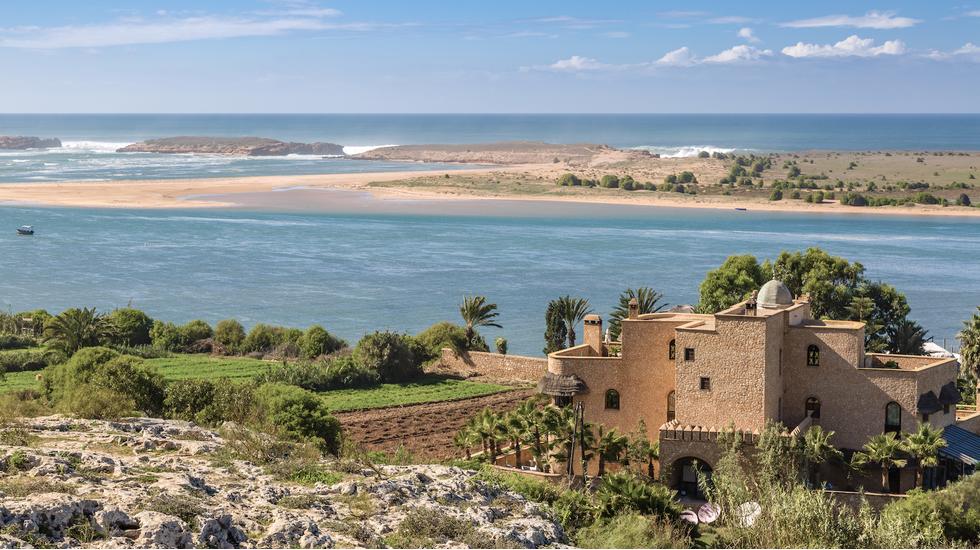 Morocco's Morocco's Atlantic beaches teem with tourists recharging from the intoxicating, sense-assaulting city of Marrakech. While most hotfoot it to Essaouira or Casablanca, local residents escape the incoming hordes by heading in the opposite direction to lesser-trodden Oualidia ("Waa-lee-dee-a"). Within three hours of Marrakech by car, the blue-shuttered houses of this small, soulful town hook around a lagoon, shielded from the wild Atlantic by rocky promontories.

The traditional fishing village was first put on the map when a royal palace was built for former sultan Mohammed V, who spent many holidays in Oualidia. Today, the still-guarded villa remains empty and in disarray alongside a crumbling 17th-century kasbah designed by the town's namesake, Sultan El Oualid - but the village's reputation as a summer playground lingers. In an effort to retain its character, the current king Mohammed VI banned waterfront construction following a visit in 2010, and only a few hotels are scattered throughout the whitewashed village.

The pace of life is as slow and unhurried as the tide that shapes its shifting landscape of lagoon islands and sandbars. In August, colourful wooden boats cart Moroccan holiday-goers from beach to hotel to restaurant. Come September, the town belongs to the locals again. Long, leisurely days are spent kayaking or sailing, passing reed-lined banks that shelter brooding storks and elegant egrets. Spoonbills, avocets, cormorants, kingfishers: the casting list of support actors leads to the star of the show - the magnificent flamingo. In October, the northern tip of the lagoon is partially hidden beneath a cloud of candy-pink waders.

It's not just a flamboyance of flamingos that feasts on the bounty of the water. Oualidia is known as the "oyster capital of Morocco", with freshly shucked huitres that taste of the ocean sold at beachfront shacks. At dusk, groups of young tousled surfers pause to haggle over a few-dozen huge molluscs to take back to their rented fishermen's houses. Groups of chic Marrakshis sample them baked au gratin or à la ciboulette (roasted with cream and chives) at the unpretentious seafood restaurants attached to waterside oyster farms - easily distinguished for their bone-white cube architecture.

Oualidia isn't the place to go if you want a buzzy nightlife or cool scene; it's the place to do nothing more complicated than watch the tidal island appear and vanish before you like a mirage.

Built like a grand Moorish fort, La Sultana is tucked away among palm-strewn gardens and koi ponds on the edge of the lagoon. Just 12 rooms and suites create an intimate feel; many look out over the Atlantic, some open onto private terraces - the best with outdoor whirlpool baths. A large infinity pool seeps into the horizon, while a colonnaded indoor pool is part of the tranquil spa, where expert therapists carry out argan-oil massages in marbled treatment rooms. Breakfasts are served al fresco on a wooden deck - a lavish affair of homemade pumpkin- and fig-jams, pastries, freshly baked breads, local cheeses as well as made-to-order Moroccan pancakes and Berber omelettes. Later, lunch is served on the beachfront terrace where a sea-to-plate menu lists urchins, oysters and the catch of the day. The seafood platter is piled with lobster, prawns and crab, best shared with friends on the wooden jetty to spot avocets without needing the house binoculars. From here, guests embark on flamingo-spotting boat excursions, kayaking trips and tours of the oyster farms.

A more casual option is the family run Hôtel L'Hippocampe. Colourful gardens wrap around a small outdoor pool and 23 no-frills rooms and suites - the latter offering lagoon views and a private terrace. Families who want a bit more privacy should book one of the apartments, located just outside the gates, where separate living rooms with sofa beds accommodate kids (guests can use all the hotel facilities). The wood-panelled restaurant is a cosy spot, with an open fireplace and traditional tiled floors. Tables and chairs spill out onto a stone terrace, which juts over the water, and the menu is crammed with day-fresh fish and seafood dishes.

This unassuming restaurant is attached to the longest-running oyster farm in Oualidia, which has been luring in-the-know foodies since 1947. It is also one of the best spots to catch a sunset. As the sky bruises lilac and purple, slurp huge, succulent huîtres, washed down with a glass of crisp Moroccan white. The molluscs also come cooked every which way, from au gratin to tureen (soup) or a la ciboulette. If you've had your fill of oysters, opt for the spaghetti aux fruits de mer (with seafood) or the locally caught filet de sole drizzled in a tangy orange sauce.

Full-length windows frame views of the lagoon and, beyond, the Atlantic Ocean here. The decor is simple - mismatched wooden chairs, white linen, tiled floors - but the food is excellent. Standouts include the lobster or crevettes, although the fruits de mer platter offers both these and more (think: oysters, sea urchin and spider crab). Ask after the catch of the day, which could be bass or bream, depending on the season. Expect large plates and low prices.

In spring (March to May) and autumn (August until early November), flocks of migrating birds flying between Spain and southern Africa stop over at the northern tip of the lagoon. Rent a motorised boat or sign up for a birdwatching safari with La Sultana, where a knowledgeable guide points out everything from the black-winged stilt with its comical bandy legs to the little stint scurrying busily across the shallows. Storks in Morocco are as common as sparrows in England - "we have a lot of babies here", jokes Nabil, a local birding expert. Visit in September when candy-pink flamingos descend in droves to feast on the shrimp-rich waters.

You can't visit the oyster capital of Morocco without sampling its most famed shellfish. The first oyster farm was opened in 1947, and today around 200 tonnes of oysters are produced in Oualidia each year. Take a boat ride to discover a string of the white cube-like buildings poised on the rocky shores, where you can learn about the production process and take part in tastings - often with a glass of vin blanc.

A jigsaw of lagoons and sandbanks, Oualidia is an ever-shifting spectacle, and is particularly magical at dusk. Take a peaceful dip in the clear, calm waters as the light falls to see the sun brushstroke the sky pink and lilac. There's nothing more soul-soothing than floating on your back, with only the putter of silhouetted fishing boats interrupting the silence, as the blushing landscape goes into overdrive.

From the main beach, La Grande, the crowds clustering around the seafood shacks empty out the further south you head. On foot, it'd take over an hour before you reach the near-deserted stretches, but venturing out on horseback covers a lot of ground in little time. Many centres specialise in Arabian horses, majestic steeds with rippling coats and wild manes, which dance along the shore in a cloud of sand and flicking hooves. You'll trot through undulating dunes and along yawning beaches, weaving around powdery bays and pausing on lofty headlands, protected from the ocean spray by honeycombed rocky outcrops that bear the brunt. Local guides reveal hidden caves (sans cheveux), crawling through rocky tunnels to discover extraordinary natural stone windows framing views of the crashing Atlantic far below.