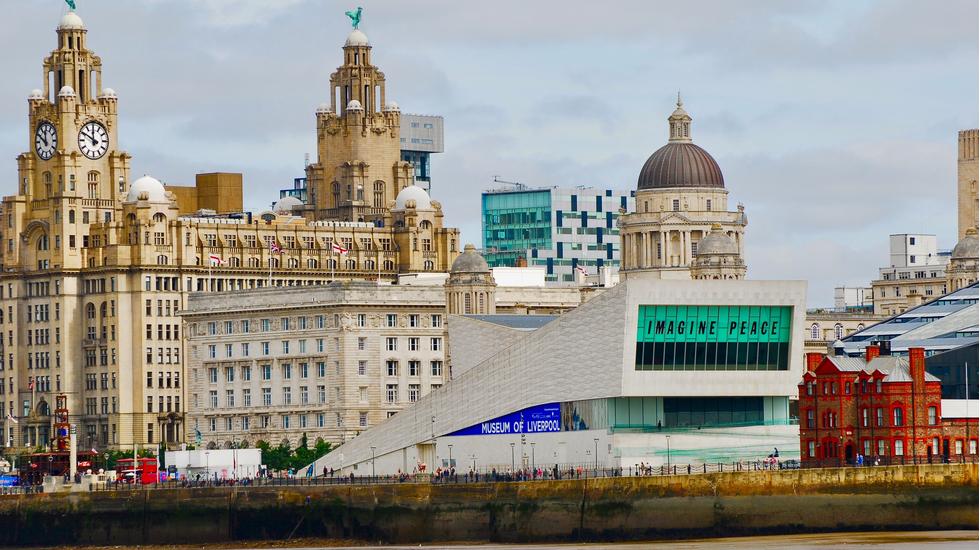 Sound Sound is Liverpool's signature, from the guitar strums of The Beatles to the swooping emotion of a packed football stand. Heels on cobbles late into the night. The jeers of lads performing wheelies down the main roads and the quiet clunk of 11am pints being set down outside Irish pubs by grandads.

I arrived in the city in mid-September, when the sky above Lime Street station's glass curve hinted at late summer but its streets felt subdued. Caught between lockdowns and the seasonal purgatory, it seemed deflated, even hushed.

This is a city on the edge of the UK and not just geographically. Politically and socially, Liverpool leans leftwards of the land it lies within, distinctive in accent and vocabulary. It sees itself as the outsider of England, kinder than the whole, bereft of the stiff upper lip.

The quiet reminded me of travel writer Jan Morris' visit to Liverpool; writing in 2011, she noted its "battered kind of dignity". The city she found was tired, maltreated, worn - but even then, hospitable. For all its elegant civic architecture and upbeat character, Liverpool's history has been one of struggle: a port built on the dark chaos of the Empire, a 20th century peppered with deindustrialisation, economic stagnation. "Managed decline" reverberates through shared memory, a phrase taken from a wounding memo by a Thatcherite minister.

"Proud" is a word often used to describe its inhabitants, though I'd argue it's unfairly mistranslated as arrogance by outsiders. A better translation would be endurance, constructed from a history of collective hardship.

In 2008, though, the city rediscovered its beat. Awarded the status of European Capital of Culture, Liverpool began to roar and the physical manifestation of its endless hospitability arrived: hotel openings, restaurants and a shapeshifting, diverse nightlife. Its historic pull was strengthened by the origami folds of a new Museum of Liverpool building and the jagged black shards of modern architecture at Mann Island. Warehouses that once sat empty were strung with lights, disco balls and sound systems, and dead-end alleys between buildings were reinvigorated by night-time soundtracks.

Then came the independent restaurants. Maray offering Middle Eastern-spiced small plates. The now-closed Oktopus with its combinations of braised butterbeans and gently charred courgette or its ceviche of blood orange, sea bass and jalapeño. There's Pilgrim with a menu inspired by the Camino pilgrimage routes, and Lu Ban in the edgy Baltic Triangle area, where xiao-panzi (small plates) are filled with traditional Chinese cookery. For coffee: Bold Street Coffee, 92 Degrees and Mother Espresso. Footie fans score home-baked pies from co-operative Homebaked. Hospitality sat at the heart of all things remade in the city and it was home-grown; scousers doing good for scousers. Until the pandemic arrived.

This winter brought soaring cases and deaths, pushing Liverpool into unwelcome headlines, mass testing making the six o'clock news. At the time of writing, the city is again under lockdown, a situation that's straining its hospitality industry to the limit and slowing life in a city of movement. Back in London, I find myself thinking of the docks I traced in September. What would happen to all the small restaurants and cafés that gave Liverpool its fresh identity? How many more blows can a place withstand?

It's got real support for one another and that comes through from the hard times it's had. It makes the city.

"This city has got resilience," says chef Ellis Barrie when I call him. Barrie, of Great British Menu fame, grew up on the leafy southern side of the city and learnt his trade in restaurants across the centre, before setting up the award-winning The Marram Grass on Anglesey, North Wales. Last year he returned to Liverpool to open a second restaurant, Lerpwl, under the arches of Liverpool's Albert Dock. "It's got real support for one another and that comes through from the hard times it's had. It makes the city."

The restaurants are empty, but Barrie insists most are making the best of a bad situation. Madre, a taco bar on the Albert Dock, has parked its van by the waterfront and is sering spiced hot chocolate and generously stuffed beef brisket tacos to cold-fingered wanderers. Belzan, an Allerton bistro, is sending out an at-home menu of soft-braised feather blade and juicy pork chops doused in a mustard sauce.

Before the pandemic, it was homegrown independent joints which lit the fire of the hospitality boom. It's why, in 2013, Independent Liverpool was set up. What started as a side-project, with co-founders David Williams and Oliver Press writing about their favourite independent businesses in the city, soon found an audience in scousers keen to support their own. Now, the blog, app and the accompanying discount card counts 120 local businesses on its books. Yet it was always more than just a money-making scheme. Echoing the character of a city that doesn't think twice about helping a stranger, the duo made sure to include all independent businesses in the city, not just the ones able to offer a saving. "We wanted to talk about everyone," Williams tells me. "This is a city associated with community and that's wholly responsible for the reason why we are where we are."

"Independent" has become a byword for a certain kind of business - sleek, Instagrammable, a place where you feel comfortable spending your money thanks to a vague sense of sticking it to the chains. But in Liverpool, it also means "homegrown" and "hard-grafted". "When I say independents, I mean I know the guys who own them, and they know the people who work for them. We all went to the same schools," says Barrie. "But look at us now: we're all masters of making barista coffee and bespoke food, yet never did a cookery course once in our school education. For scousers, the hospitality is just in you."

We associate 2020 with doom and gloom, but I know a lot of businesses that are doing better than ever and have come out of this with a stronger following.

When we talk, he mentions the other restaurants in the city, singing their praises, referencing Zoom calls and city-wide meetings, feeling their way forward towards the light, pushing to try and get the city back on its feet. "Togetherness" is a word that appears again and again.

"It's always had that resilience behind it, that grit, that hard graft, a sense of 'we'll do this together'," Barrie continues. "We all get involved, we all want to make the city a great place to come. Speak to any scousers and all you'll hear is how good Liverpool is. Scousers have this in the blood."

I hear the same tune talking to Ioan Roberts, the director of 24 Kitchen Street, a music venue in the Baltic Triangle area. Squeezed between the dilapidated shells of abandoned warehouses and - increasingly - monolithic housing developments, the diminutive club has been at the heart of the city's alternative nightlife for nearly a decade, providing a space on its dancefloor for grime and bass artists, as well as jazz, Afrobeat and independent performers.

Nationwide, the nightlife industry has suffered far more than its hospitality counterpart. But despite the obstacles 2020 threw 24 Kitchen Street, Roberts admits that last year went surprisingly well. He reckons they hosted more music events during the pandemic than any other venue in the country, welcoming independent artists for outdoor sets and dinner-and-drinks performances, enforcing strict social distancing and mask etiquette inside semi-dilapidated warehouses.

"A lot of our customers are the sort of people who didn't tuck their shirts in at school, so asking them to follow the rules was…" The end of his sentence hangs. In October, the venue was fined for breaking lockdown rules, but true to form, scousers stepped in. Local DJs organised a crowdfunder and raised the full fine in just three hours. Roberts says that they simply asked for 24 Kitchen Street's bank account details. "It ended up being a few hundred quid more than the grand, so we gave the money to a food bank."

Roberts, like Independent Liverpool's David Williams, says that the pandemic has opened a door to creativity: venues have adapted, restaurants have reshaped - and that's been possible thanks to scousers. "The people of Liverpool have acted like a safety net," says Williams. "People can be more creative; they can have a bit of fun with it all. We associate 2020 with doom and gloom, but I know a lot of businesses that are doing better than ever and have come out of this with a stronger following."

Sat in London 350km away but dreaming of the Mersey banks, I browse the menu of Maray's at-home meal box, which is now offered through nationwide delivery. Perhaps I'd been wrong about the hush. The city noise hadn't been stifled - it was just on pause, adapting and creating. As I order a meal box, a remark Barrie had made comes back to me: "The scouse never leaves ya, does it? You just get drawn back into the city."